For a better experience on Cayman Vip Transport,  update your browser.

The Cayman Islands are a major international financial centre. The biggest sectors are "banking, hedge fund formation and investment, structured finance and securitisation, captive insurance, and general corporate activities". Regulation and supervision of the financial services industry is the responsibility of the Cayman Islands Monetary Authority (CIMA). 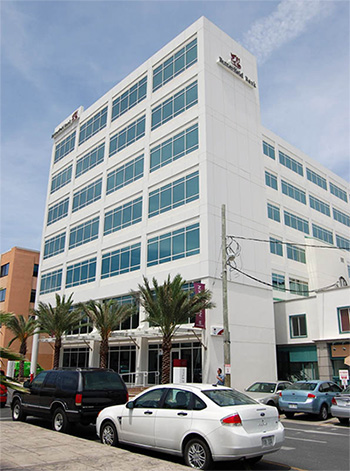 The Cayman Islands are the fifth-largest banking centre in the world, with $1.5 trillion in banking liabilities. In June 2008 there were 279 banks, 19 of which were licensed to conduct banking activities with domestic (Cayman-based) and international clients, and the remaining 260 were licensed to operate on an international basis with only limited domestic activity. Financial services generated CI$1.2 billion of GDP in 2007 (55% of the total economy), 36% of all employment and 40% of all government revenue. In 2010, the country ranked fifth internationally in terms of value of liabilities booked and sixth in terms of assets booked. It has branches of 40 of the world's 50 largest banks. The Cayman Islands are the second largest captive domicile (Bermuda is largest) in the world with more than 700 captives, writing more than US$7.7 billion of premiums and with US$36.8 billion of assets under management.

There are a number of service providers. These include global financial institutions including HSBC, Deutsche Bank, UBS, and Goldman Sachs; over 80 administrators, leading accountancy practices (incl. the Big Four auditors), and offshore law practices including Maples & Calder.They also include wealth management such as Rothschilds private banking and financial advice.

Since the introduction of the Mutual Funds Law in 1993, which has been copied by jurisdictions around the world, the Cayman Islands have grown to be the world's leading offshore hedge fund jurisdiction. In June 2008, it passed 10,000 hedge fund registrations, and over the year ending June 2008 CIMA reported a net growth rate of 12% for hedge funds.

Starting in the mid-late 1990s, offshore financial centres, such as the Cayman Islands, came under increasing pressure from the OECD for their allegedly harmful tax regimes, where the OECD wished to prevent low-tax regimes from having an advantage in the global marketplace. The OECD threatened to place the Cayman Islands and other financial centres on a "black list" and impose sanctions against them. However, the Cayman Islands successfully avoided being placed on the OECD black list in 2000 by committing to regulatory reform to improve transparency and begin information exchange with OECD member countries about their citizens.

A report published by the International Monetary Fund (IMF), in March 2005, assessing supervision and regulation in the Cayman Islands' banking, insurance and securities industries, as well as its money laundering regime, recognised the jurisdiction's comprehensive regulatory and compliance frameworks. "An extensive program of legislative, rule and guideline development has introduced an increasingly effective system of regulation, both formalizing earlier practices and introducing enhanced procedures", noted IMF assessors. The report further stated that "the supervisory system benefits from a well-developed banking infrastructure with an internationally experienced and qualified workforce as well as experienced lawyers, accountants and auditors", adding that, "the overall compliance culture within Cayman is very strong, including the compliance culture related to AML (anti-money laundering) obligations".

On 4 May 2009, the United States President, Barack Obama, declared his intentions to curb the use of financial centres by multinational corporations. In his speech, he singled out the Cayman Islands as a tax shelter.The next day, the Cayman Island Financial Services Association submitted an open letter to the president detailing the Cayman Islands' role in international finance and its value to the US financial system.

The Cayman Islands were ranked as the world's second most significant tax haven on the Tax Justice Network's "Financial Secrecy Index" from 2011, scoring slightly higher than Luxembourg and falling behind only Switzerland. In 2013, the Cayman Islands were ranked by the Financial Secrecy Index as the fourth safest tax haven in the world, behind Hong Kong but ahead of Singapore.